I <3 Goldens ... and fishes. I really like this above pic and it reminds me of this one 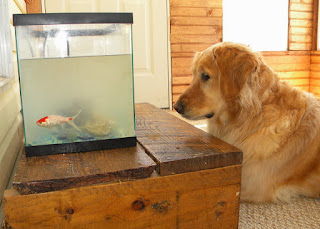 Yup, that'd be my Golden girl, Sadie... and here I thought they were bird dogs! :)
As told by JerseyJennyW at 9:23 AM

Labels: Days Of The Week, Dogs On Thursday The month of February is coming to a close. It was about 2 years ago that my dad was officially diagnosed with frontotemporal dementia ... and we were told he had 6 months to 2 years to live. Obviously, he's still with us. Although a time stamp was breathtaking (and not in a good way), that time coming and passing is definitely odd to experience as well. I'm trying NOT to think about these things today though. I'm going to try to focus more on my tea... Tea Tuesday is reminder to you too, my friends and wanderers that found your way here. Remember that all the good you do won't get done if you're not around or if you aren't properly taking care of yourself.
So, please, take a minute to relax with me at some point today.
As told by JerseyJennyW at 9:38 AM

- has a contagious laugh
- is ok driving me everywhere (I hate driving)
- plays piano
- can win over a room ~ what can I say? I love a charmer lol
- takes candid pictures of me/us/our pets/adventures
- is more organized than me (that won't take much)
- bakes pancakes and can make them in funny shapes
- is ok with the idea of desert for breakfast once in a blue moon
- understands my need to help others (especially animals) and comforts (not scolds) me when I take on too much
- finds my quirks adorable and tells me that
- will watch sappy movies like The Notebook with me
- kisses divinely
- speaks Spanish
- understands I will always need at least one pet (probably a Golden Retriever because there's nothing quite like them or their mixes) forever
- wears clothes well
- is proud (not jealous) of any attention I get
- watches a lot of movies
- shares some time with me and two cups of tea
- this kind of adorable-ness would be lovely
- is ok with my slight definite book obsession
- wants a loft room in our home
- understands I've got a lot of levels
- kisses me in the rain
- lovingly provides me with these things (ok, not necessarily, but it wouldn't hurt either)
- and, finally, this kinda love forever... Hope you're having a good week!
As told by JerseyJennyW at 9:51 AM 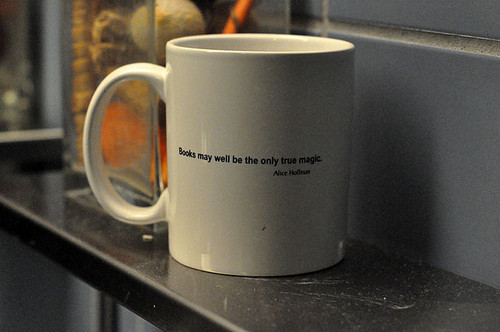 Books really are magical ... the tales they tell, the beautiful places they take us to, the characters they make us love (or hate), the lovely words you find weaved together...

Tea Tuesday is reminder to you too, my friends and wanderers that found your way here. Remember that all the good you do won't get done if you're not around or if you aren't properly taking care of yourself.
So, please, take a minute to relax with me at some point today.
As told by JerseyJennyW at 8:30 AM

historically this day is like any other, maybe highlighted with some black clothes, a collection of amazing ladies around me and, for the extra embellishment, the title "Fuck Valentine's Day" may be proclaimed as the title/excuse to go out. This year is going to be a bit different and I'm hoping for some of this stuff... Along with some other stuff. And drinks with the girls may still be a requirement ;)
As told by JerseyJennyW at 9:57 AM

"Michael Vick was a dogfighter. He paid for it, he bet on it, he participated in the training, fighting, and killing of dogs with his own two hands." -The Lost Dogs

I've listened to people say "everyone deserves another chance" and "he's done a lot of good since then" and "he's doing so well in football and trying so hard to get his reputation back" and "it was what he grew up with" and "he talks about being humane and making good choices now". I've listened and hoped that he's changed.

But maybe his second chance should have been at McDonalds or Dunkin Donuts. No offense to the people who work there, I'm just saying that his second chance, if any, should not have been being paid millions and in the position of a "roll model". And really how much good has he done that he couldn't have done before? Would he still be fighting dogs if he didn't get caught? Oh yea, he already answered that for us - he said he would! The rescues who took on his severely broken dogs still haven't seen a good chunk of the money promised them either. "Doing good" might be NOT taking money for speeches and giving it to the dogs! The football thing just makes my stomach roll too - of course he's good, you assholes - he has to be! I mean, if he were one of his dogs, he probably would have been killed by now. What he grew up with? What's in his blood? Oh, that's awful! He was a professional athlete - he was exposed to many different -better and more humane- hobbies that he could have taken up! What I wouldn't give to take up vacationing or buying awesome real estate all over (of course, my money would probably go to helping animals and land preservation, but whatever...). Oh, and his lectures and speaking which he should be "commended for" ... um why doesn't he answer questions? Why are his "talks" on humanity scripted for him?

"As that dog lay on the ground fighting for air, Quanis Phillips grabbed its front legs and Michael Vick grabbed its hind legs. They swung the dog over their head like a jump rope then slammed it to the ground. The first impact didn’t kill it. So Phillips and Vick slammed it again. The two men kept at it, alternating back and forth, pounding the creature against the ground, until at last, the little red dog was dead." --The Lost Dogs

I digress! I came across a video the other day while reading an article about Vick. He was apparently given a key to the city of Dallas and the mayor was requesting it back, saying the honor and ceremony were not okayed or to be honored since he did not approve it (he kindly said Michael Vick did not fit the criteria - like a very positive, international diplomat). The video was at the very bottom from someone who had been at the Dallas gathering. Honestly, I thought the video was more important and news worthy than the article about Vick possibly being insulted. However, I guess the editor of the Philly-area news wouldn't ok with the idea of focusing on this and not the fact Vick might have his poor feelings hurt (kudos to whoever put this video in though).

Here's the point of my post and all I think I really need to shut all those "second chance" people up. This is Michael Vick below just months ago and it chilled my bones...

As told by JerseyJennyW at 9:07 AM

I'd like this outfit, a body that makes this outfit look bangin ... and somewhere warm to rock it :) Hmm, think I can make that happen this week? ha!
As told by JerseyJennyW at 9:51 AM

My Little Pony!! I used to love these when I was little ... all the pretty colors and the hair to brush! Yay! This makes the tea picture for this week that much better and cheerful!

Tea Tuesday is reminder to you too, my friends and wanderers that found your way here. Remember that all the good you do won't get done if you're not around or if you aren't properly taking care of yourself.
So, please, take a minute to relax with me at some point today.
As told by JerseyJennyW at 10:44 AM

happy birthday to my boyfriend :)

xoxo
As told by JerseyJennyW at 10:14 AM

this Website Want Wednesday has me wishing for nothing but lots and lots of fun for my sister on her birthday. She's 22 today!! 22! I can't believe it! Whoa. Old lady, right? The fun of 21 is officially over and you're old, kid. Ok, just kidding. I mean, whoa, yea, that'd mean I'm super old and that's definitely not true! No, no, no.

Love you, little one. Have a great day! Here's hoping you end up somewhere like here...

yes, that's a slide from the 2nd floor!! Yea, I'd definitely want to be there

ok, you're somewhere quite cold, but know I was hoping you'd be here just the same ... maybe with me and some fruity and cold drinks in our hands ;)
lol

As told by JerseyJennyW at 9:52 AM

It's a chilly time of year and I'm definitely one to get cold. In fact, one of the boyfriend's chief complaints is my cold feet and hands when I climb into bed. Oh well, he's nice and warm to snuggle up with ... kind of like a good cup of tea.

My listening ear is always here, friends. Feel free to comment, vent or drop me a line in some other way.

Tea Tuesday is reminder to you too, my friends and wanderers that found your way here. Remember that all the good you do won't get done if you're not around or if you aren't properly taking care of yourself.
So, please, take a minute to relax with me at some point today.
As told by JerseyJennyW at 9:44 AM