I was on the phone earlier and just wandering around my apartment chatting. I can't honestly tell you what caught my attention: maybe I saw movement out of the corner of my eye, subconsciously noticed something amiss or felt myself being watch. No matter what it was, I found myself staring at the elusive, long-haired black cat who was sitting outside about 15 feet from my bedroom window - staring right back at me!

Oh, I jumped right on that since thankfully I made my parents bring up my trap the other day when they came to visit. I ran into the sanctuary, got some super smelly wet food, found a blanket to throw over my trap and got a piece of paper to lay down at the bottom of the trap as well and went out into the cold night. Of course, the cat was gone ... but I set my trap anyway because I was tired of NOT having this cat, but seeing him/her all over the property. Nights the best time to trap cats, or at least this one since it's quieter here then and I've seen the cat more after dark. And just because I'm the only one here at night and I'm off the clock doesn't mean I can't be trying to get these kitties. AND I GOT THE CAT!!!

Oh boy was I nervous since I am alone here now. I got the kitty out of the cold and it didn't lunge, hiss or spit at me. I then set up a cage in quarantine and openned the trap up so the cat would walk into the cage. S/he didn't seem to want to ... until the cat saw the yummy food I had put in the cage too. It was then I got to pet her/him, pick at him/her a bit (the cat has some mattes) and feel the kitty ... feels like a solid kitty, definitely not starved but still a bit thin, I think. I think I caught a good kitty!

Woo hoo!
As told by JerseyJennyW at 9:41 PM No comments:

Today we lost our Sammie at the sanctuary, Tabby's Place.

Last night Sammie was not doing so well. He was very picky when we were feeding him, which of course is always a concern since he's diabetic - we needed to make sure he ate before he got his insulin. We ended up giving him beef baby food which he licked at.

Today apparently he was having trouble breathing and was taken to the emergency vet hospital we use. Tests were still being done there when I had my break between shifts, but apparently he was doing very poorly - suffering from either congestive heart failure or/AND some form of quick forming cancer mass in his chest, I believe. Angela referred to Sammie as the "come back kid", but it seems he met his match today. Jon and Ginny went to the hospital to be with him when the decision was made.

I'd refer you to his page, but I'm not sure how much longer it will be up on the site. He's been with us about three years and I'll put a few words up about how Sammie came to us:

Since Sammie is diabetic, his health depends on careful monitoring of his eating and behavior, as well as administration of insulin. Unfortunately, Sammie was owned by an elderly woman whose health was fading. She was not giving Sammie the attention and care he needed and his health (and, in fact, his life) was in jeopardy.

To make matters worse, the owner's daughter was strongly suggesting that Sammie be put down, since her mother was not able to care for him properly. Fortunately, a kind neighbor intervened on Sammie’s behalf. While she couldn't take Sammie, herself, she called us and pleaded Sammie's case. As usual, we had a long waiting list, but the woman said she would be happy to visit Sammie regularly, to keep an eye on him and administer his insulin, for as long as it would take for his spot to open up. We were very happy when Sammie was able to finally join us at Tabby's Place.

Ah, geez, I had to just go back and put everything about Sammie in past tense ...

On a good note, though, Candice is cancer-free! The mass we removed was apparently inflammation, some form of extreme tonsillitis, which Dr. C was amazed to find out - good news, but amazing since it was so awful looking. Candice is on antibiotics now and will have the teeth she needs pulled out on Monday.
As told by JerseyJennyW at 10:38 PM No comments:

I just found out Monday that my one little rescue foster kitty, Candice, may have cancer. I'm terribly disappointed.

Furrever Friends Rescue & Volunteers (FFRV), my rescue, pulled her, Norbit (now Ruby), Sam and, a few days before those three, Cleo from this shelter near where I work. They seriously need help there ... and that's putting it nicely! Candice was there for almost 3 years in a cage and now it seems she might have been sitting there with this gigantic mass in the back of her mouth. We were going to pull her teeth Monday, but after they put her under and opened her mouth to put the tube in, they saw this huge mass pretty much blocking the entire back of her throat. So instead of pulling out most of her teeth, they removed most of the mass and did a biopsy. They didn't want to pull her teeth (and put her through that pain) only to find out she has terminal cancer ... and the mass they removed was like an inch or little under in size. It was huge! Poor baby ...

She's the sweetest little girl too! She just lays around, spinning a bit and purring when I talk to her. They think she's about 7 years old, but it's hard to tell from her teeth since her mouth is so bad. 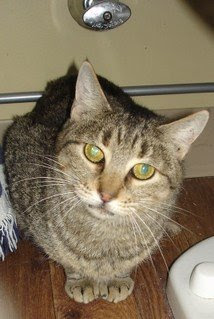 As told by JerseyJennyW at 9:05 AM No comments:

UPDATE as of 1/8/08: No fines were imposed in court last night. Jen S, along with another board member and Smith’s 9 year old daughter, appeared at court. After an hour of waiting Jen S was asked several simple questions … and then “excused”. Honestly, we were confused as to what exactly this meant, but did NOT ask questions.

FFRV Founder, Jen Wesh, was not a happy camper when she finally got an update on what had gone on at court that night. True, Furrever Friends did not have any fines to pay that night. However, she found out that two of her board members (Jen Smith and Jennifer A) and Smith’s 9 year old daughter had to sit around the court room all evening just to simply be dismissed for all the reasons we had requested to not be required to come that evening BEFORE the trial date. It seemed as if the three had to sit around just to be intimidated by their surroundings.

At this time, we are starting to get the ball rolling on getting ready for court in Camden on March 11th. We:

- are seeking stories from people who have been pet limit law victims in NJ
- just ordered buttons on not limiting love or pet families that we’ll sell to raise money
- are putting together a little info sheet to spread out to the public
- are seeking out rescue organizations, shelters, private rescuers and NJ residents who will morally support us.

We are obviously nervous, but very excited too that we could make such a big difference in rescue work and have our fingers crossed that it will not be long from now that Jen Smith’s foster home can go back to normal, loving her foster furkids and not being harassed.
As told by JerseyJennyW at 9:00 PM No comments: