I made a sound attempt to talk my sister/family into a rescue/shelter pup, but sadly my sister had nothing but bad experiences.

- The first pup she pursued on her own, was approved for and almost adopted ... but the pup suddenly died from parvo before my sister actually got her. My sister was not only heartbroken, but surprised as the "rescue" had never even mentioned the litter the puppy was a part of was sick.
- There were several others with LOTS of applications, of course, too.
- Last attempt was, a week before my sister was going to pick up the puppy she had found, I sent her every local pup in shelters and rescues that looked like something she might have been interested in ... one sparked her interest. She filled out the online application, rearranged her work schedule and made arrangements with me to go see the dog while my mom called for more information. We spoke the the shelter, they knew we were coming to look at this particular dog and such. However, it wasn't until we were there that they informed us that the manager was out and online applications had not been printed out yet (so there were two, then three applications in front of us) and though they had told us the dog my sister liked was sick, it wasn't until we were there that they informed up that this meant we would not even be able to meet or see her. We're yet to hear a word yet either and at least a week has passed at this point now.

And now we have this munchkin running around... 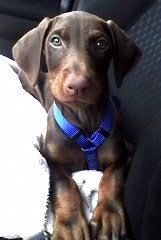 My sister picked up Tali with her bf (yes, another kick to the shins to remind me I had nothing to do with this whole thing ... she uninvited me to go with him instead) from a meeting point where her breeder was nice enough to bring Tali's mom and paternal grandmom so my sister could see the dogs she came from.

Don't get me wrong. She's adorable and I love her ... but those emails every week about the ones scheduled to die are tearing me up ... I try just to ignore them, but sometimes I feel "enlightened" in a sad, painful way. I guess I need to figure I did the best I could to talk her into a shelter/rescue dog, that it wasn't meant to be and this pup came from a nice guy who loved his dog and raised her pups in his kitchen with his family and all.

Taking care of rescue dogs
Is something I do best.
I know because I've done it,
And I've surely passed the test.

The dogs I've bathed, the food I've fed,
The vacuuming I've done,
And all to watch a frightened soul
Sit dreaming in the sun.

My own dogs I've neglected,
But I tell them every day
That I love and cherish each of them
Though a new dog's come to stay.

I know they understand this,
For in their eyes I see
The love that I have given them
Come shining back at me.

Some people think I'm crazy,
Some others think I'm great.
But very few can understand
What really is at stake.

If I can love and help a dog
To find a better way,
My own life is much richer,
I look forward to each day.

So now you know my secret,
It's there for all to see,
The love I give, the life I save,
I do it all for me.

by Kathleen Parsons
As told by JerseyJennyW at 8:34 PM