I haven't written much while my dad was sick and I haven't written at all (not even about my dreams which I always did in my journal the same day) since he passed. So, bare with me here while I write (though not about him).

Last week, Matt and I sprung this little girl from Philly ACCT.

We were literally her last shot - her time at the shelter was up and the hold Bella-Reed Pitbull Rescue had on her was up as well. Their fosters had fallen through when this girl (shelter name Mimi) did not test well with cats. Being that our kitties are kept away from the dogs because of Miles, we knew we were a possibility for her ... but would she fit in with our guys? Were there too many problems for us to take on? We went to at least meet her.

Matt & I took her out and it was quite obvious she had been really neglected - all bones, set on scavenging the yard we were in with her and with pressure marks on her hips ... and just a puppy! The shelter thought she was 3 - 5 years old from how gross her teeth are, but she's obviously a pup - curious, awkward, silly, etc.

Matt kept asking me, "What do you think?" To which I'd respond, "Babe, I've got no idea. If she had a broken leg, injured eye or something like that, I'd tell you if we could handle it, but this is behavioral - this is all you" 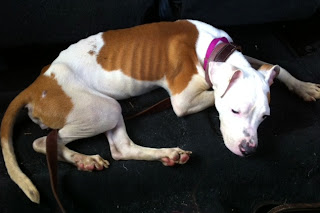 We left with her and she had a new name as well - Skylar.

She happily pranced out of the shelter and we were happy to find that she was a breeze in the car - she just curled right up and passed out in the back of the truck. The easy ride was sadly followed up by a lot of crying in her crate. So much for trying to keep her a secret from the other dogs! However, we did quickly find out she wasn't aggressive with cats. We had her crated in the same room as our foster kittens and though she was definitely curious, she was easily distracted and came traipsing over for a treat.

The two photos above are from the day we brought her back to our place to foster her (one at the shelter and one in the truck leaving). Below is a more recent photo of her. 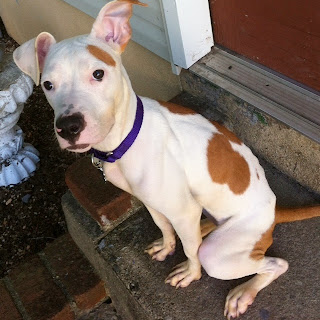 Though still skinny, our girl is doing well. Skylar is so treat-motivated that she'll do just about anything for a treat and has already learned "sit", "paw", "other paw" and "down" ... though I'm partially convinced she just knows the routine and wants a treat. Sometimes I don't say anything and she'll just sit by me and throw her paw up :)

She has a little bit of a cough, so Sky hasn't met the other dogs much yet (she's been introduced to Miles a bit). We do have a decent routine now though where our doggies go in our room so we can have her out for some one on one time (she loves being with people and gets really upset separated). This happens a couple times a day since she's on small, multiple feedings, one of which I give her in a kong so she has to work for it. I put a serving of her food into a kong with some no-sugar apple sauce or no-salt peanut butter and then freeze it. It keeps her quiet in her crate for a bit and makes her work for it a bit/slows her down so she doesn't gobble.

Sky's got a long road to recovery ahead of her though. We need to put weight on her (we're going through treats like crazy), which is a slow process to do it correctly and safely for her. We also need to make sure she has no possession issues, which can happen when a dog has been neglected to the point she was. We also need to get her house broken (she pees in her crate a lot, so I'm guessing she was just left locked up a lot and got used to being in her own filth) and make sure she gets along well with us & our pets to try to figure out the right kind of future home for her.

As told by JerseyJennyW at 5:48 PM