The annual (at this point, very overdue) potluck picnic is happening soon ... and this year it'll be at our home!

Obviously it's late this year - between moving, breaking my knee and the wedding, the potluck just wasn't happening in the spring. Plus, I figured that having the potluck picnic in the fall was a good time to get together some of the people we couldn't invite to the wedding due to guest number limits - we know and love so many people! 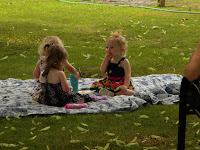 This picnic is always an excuse to get together all the good people in our life though and has often been an opportunity to meet some people who I've mostly chatted with online or via email about rescue stuff. I love it! It's a bunch of people coming together and different minds either chatting ... or respecting our good time enough to avoid each other hahaha At least there's been no drama that I've ever been aware of.

The food is always delicious too since it's such a collection of different people & tastes - appetizers, desserts, vegetarian, seafood, gluten-free, etc. I leave it up to the guests to simply bring something they want to eat.

I'm not going to deny being a bit nervous though this year - it's always been at the farm with lots of room to spread out, a long driveway for parking, an extra fridge for anything that needs to stay cold and undeniably more things to do - like canoe or see the horses & sheep. 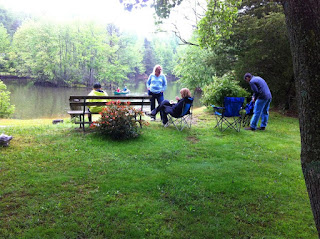 HOWEVER, we have a house and how can I not celebrate that and not just host it here?! So, lacking the space, extra fridge and farm animals, it'll be here in the back yard with blankets out and chairs if guests choose to bring them. We've got our table in the dining room, the counters in the kitchen and the table on the back porch to set stuff up.

Side note for anyone reading this and wondering, our hooligan pets will probably be away for the most part ... for their sanity & the guests ;) 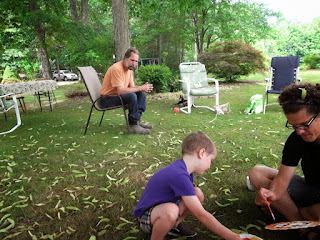 As told by JerseyJennyW at 3:20 PM

I ran into the people we bought our house from while I was working today. At first, I didn't recognize them (yay! my poor memory from epilepsy) and then when I did, they didn't seem to recognize me.

I was tempted to say something, re-introduce myself ... but then I didn't. Every time I went to, I thought of all the things I'm frustrated with about this house. Don't get me wrong, I love our house, but the house they sold us - ugh! All the garbage out back (buried in the yard or just tossed in the woods). How about all the crappy DIY stuff when they didn't really seem to know how to do? Like the molding in the kitchen that was just laid up against the wall rather than actually attached. Oh, and the toilet not properly sealed that leaked into the kitchen. Yea... So I didn't re-introduce myself because too many negative "WTF?!" kind of thoughts were coming to mind.

On a different note, yesterday felt super successful! Joa's Arc has got some potential homes lined up for the CH (neurological) kittens we just took in. Matt & I went to the farmer's market and then we worked in the yard yesterday - tearing out weeds, trimming the hedges, weed whacking and mowing. The chickens got some delicious treats. There was some good resting time after the yard work and dinner ... oh my goodness, dinner! Dinner needs its own paragraph...

Our friend Debbie R made some absolutely delicious food while I was down with my broken knee & after some recent joking about getting more food out of her, we arranged to have dinner together at her home. That's where dinner was last night. Debbie & Rich have a beautiful home, which Matt & I found quickly by spotting some kitties slumbering on their front stoop. There were three courses with several options - I seriously cannot get into how good each dish was! I could have walked away full just from how much of each appetizer I wanted to eat! Nothing was disappointing and I made a solid effort to at least try one of each ... even when it was time for dessert and I was sure I would burst. The conversation was just as great from food to rescue to friends to fundraisers to legal stuff to family to break in's and bats - it was all over and all interesting. In the end, Matt & I left much later than we were expecting when we headed over and yet it still felt too soon.

There's not enough good things I can say about the time we had last night aside from I feel very, very grateful that Matt & I have the privilege to call Debbie & Rich friends.

As told by JerseyJennyW at 9:50 PM

For our wedding, my Aunt Dianne gave me the most beautiful, but, more importantly, a very special set of China - her China that she has been collecting piece by piece since the year I was born. She said that it is also one of the last designs made in the USA. How neat is that!? She also gave it with a sweet note saying not to save it for "special occasions", that some of the most ordinary days have turned into special ones.

With that in mind, I wanted to have it out all the time ... but safely out too hahaha So I started to come up with a plan and it involved finding the perfect piece to display it on. I found a cute little shop and it had some things like what I had in mind, but not exactly what I wanted. Well, last weekend Matt & I finally stopped into a shop we have past a few times and been interested in and there on the wall was what I was looking for! I bought it. 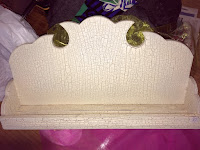 It isn't an antique like I wanted, but has crackle paint on it making it look aged. It has a little lip on the display and two indents that will also hold the plate in place without putting weight or pressure on the lip. That's what I really like - I'll be able to display one of the plates without blocking it like some other plate displays do (with a bar in the front) and it won't need to be directly hung on the wall either. I love the crackle paint, but it's not going to stand out against the white section of the kitchen where we've been hanging important pieces.

So... aside from just finding this display piece, I needed to get crafty. 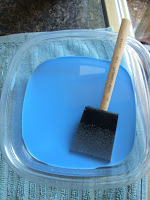 Getting crafty involves Darcy, which is nice because I've been missing her. We did so much talking & planning for wedding stuff and then got busy afterwards.

Darcy met me at a local craft store that I love and I had in mind to find a different color crackle paint. Darcy had a different plan though - the crackle paint takes several steps and her idea was cheaper, which I of course need to keep in mind. So, Dar had me pick out the paint color I wanted and told me just to add water to it with that idea that I would "white"-wash the crackle paint already on the piece to achieve the look I wanted. I picked a gorgeous blue to help the blue on the China pop a bit more... and I love blue.

Blue-washing commenced today while Matt & his brother Michael were outside taking down a large dead branch off a tree in our yard. I love seeing them working together because I know how special the time is to Matt - being constructive with Michael. He loves it.

What do you think? 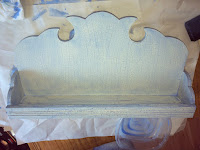 My first try was way too runny/watery - it wasn't retaining at all. So, I tried several different ratios with the paint and water. Honestly, I can't tell you which worked best because I kept changing it and eventually started layering it too - painting, changing the ratio & painting over the last coat. I turned on a fan to help it dry as I got it to a version that I really liked - blue, but still with a lot of the crackle paint showing through.

Like I mentioned, we have a section of the kitchen wall we've been hanging important pieces. So, after the display piece had dried and Michael had left, Matt measured, leveled, marked the wall and pre-drilled holes for the anchors he got. Matt and I then picked out the plate we wanted to display. Some room was left over, so we picked out two tea cups that fit as well... and I think it looks amazing! 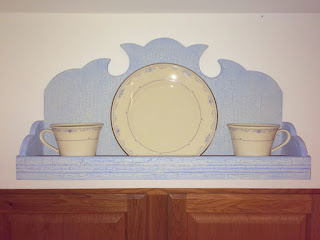 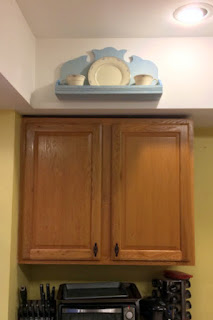 As told by JerseyJennyW at 7:10 PM